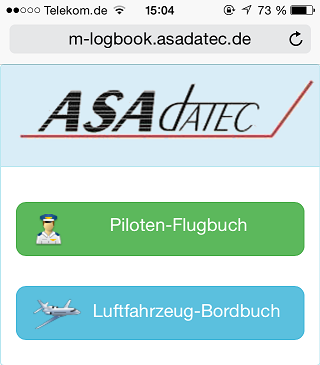 The possibility of transferring data at every time from every place is one of the most important assets of mobile devices. It naturally becomes more important for the aircraft sector as well. ASA Datec has realised this trend early and developed a web-based application for mobile devices, which brings the functionality of the Online Logbook to your cell phone or tablet.

The mobile application simplifies managing a logbook for pilots and other users. So the "Pilot flightbook" is a gratis possiblity to enter the personal flights of a pilot. The "Aircraft Logbook" offers the possiblity to transfer the flight data and cycles directly, which had to be entered on fixed computers so far.

The mobile web-application is usable from the standard smartphone and tablet models. You can open it by the link mobile-logbook.de .

The current Online Logbook persists and can be used as normal of course!

We use cookies on our website. Some of them are essential for the operation of the site, while others help us to improve this site and the user experience (tracking cookies). You can decide for yourself whether you want to allow cookies or not. Please note that if you reject them, you may not be able to use all the functionalities of the site.